The Adenium Obesum occurs naturally in arid regions of East Africa, from Ethiopia to South Africa.

The Adenium Obesum is an easy-to-keep plant that needs only moderate water. Give the Adenium a warm and light location. The plant likes to be outside in the summer and can be a luxury for your garden, but it should go back in when it gets colder.

The flowers of the Adenium Obesum stand in groups at the top of the usually leafless branches during the flowering season. The flowers consist of a long crown tube, which is usually yellowish on the inside with pink stripes and five crown lips that can be white with a pink border or pink with a carmine-red border.

The fruits are narrow cigar-shaped, up to 24 cm long and 2 cm wide. They are assembled in two pieces, perpendicular to the handle. When ripe, they jump open, revealing many seeds with a crest of silky hairs.

Various glycosides have since been found in the Adenium Obesum. This has attracted the attention of modern researchers in the field of anticancer medicines. So it may well be that the Adenium Obesum will be used for chemotherapy in a few years.

In the Sahel, glycoside is used to combat venereal diseases, while the milk juice is used to solve mouth and tooth problems.

Milk juice from the Adenium Obesum is used in Kenya to control lice and mites by rubbing itself with it.

When you take care of this Adenium Obesum as described, you will be able to enjoy this bonsai-like desert rose for a long time!

The juice from the roots is toxic. Keep children and pets away.
It is recommended to wear gloves when pruning and repotting the plant. 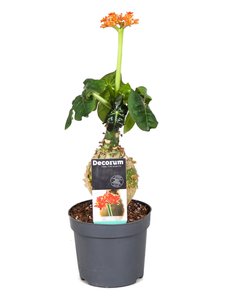 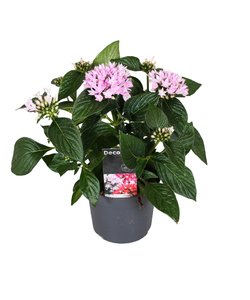 30 cm 17 cm
Aphelandra Squarrosa - Zebra plant
€16,75
Available
Add to cart
Didn't find what you're looking for?
Let us help!
Top quality fresh from our Dutch growers!
Delivery in the European Union
Before 22:00, shipped next business day
By using our website, you agree to the usage of cookies to help us make this website better. Hide this message More on cookies »