Respect for nature! That is what the Aloe radiates. The silent powerful appearance of the Aloe brings calmness and tranquility into the home. Product is sold per piece!

The genus Aloe that consists of more than 300 species belongs to the family of the Asphodelaceae. The books describe this plant as a kind of "wonder plant". It is mainly grown in the Caribbean, Africa and in Madagascar. You do not have to travel that far to enjoy this plant because you can buy it as a houseplant in the trade. The name Aloe is probably "allal" a Hebrew / Greek word meaning "bitter matter". In South Africa the genus Aloe is called "Aalwijn", which means as much as bitter juice. It may therefore be clear that the juice of the Aloes is bitter.

Aloe has been used by ancient peoples since ancient times.
The Egyptians used the juice of the Aloe to embalming their mummies.
The medicinal effects have been known for some time, sailors used the Aloe (the juice and leaf) as a soothing agent in sunburn. Historical reference books indicate that in ancient Rome Aloes were kept as a pot plant. Aloes have always been popular in Europe. Images of Aloes can already be found in the famous Moninckx atlases from the 17th century. Nowadays Aloes are still an essential ingredient in many cosmetics and laxatives. Aloe vera is the most popular but other types have the same properties.

These days, the plants are used as a pot plant in the living room because of their sleek shapes and colors.

This plant is best placed on the windowsill in a sunny location, and partial shade is no problem. The plants require a well-drained, sandy soil and not too much water. Aloes can generally tolerate a reasonable amount of heat, but they do not keep cold at all.

A small sip of water once or twice a week.
Aloes can remain in the same potting soil for years, adding fertilizer once a month during the summer is sufficient.

For all Succulents money that if you go on holiday before you give some extra water, the plants can easily go without water for 2 to 3 weeks. In other words, these plants are very user-friendly. In the summer months, the Succulents can also easily stand outside on the terrace or balcony. They cannot tolerate frost and they are not suitable for consumption but only for decoration. 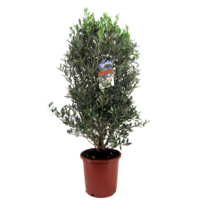 Respect for nature! That is what the Aloe radiates. The silent powerful appearance of the Aloe brings calmness and tranquility into the home. Product is sold per piece!