Aloe Vera is originally from the Arabian peninsula. Nowadays also in countries around the Mediterranean, Indonesia, Mexico and the Caribbean.

Aloe is a succulent plant from the Affodil family. There are 300 species. The plant must survive in the extreme heat of the desert, which is why it produces 70 to 80 substances that help him survive. If a leaf is damaged, the wound will immediately close with the juice, which has a solidifying effect to keep as much juice as possible in this way.

The cosmetics and skin care manufacturers use the Aloe Vera juice for their products.
The name of the Aloe Vera comes from the Arabic "Alloeh" (shiny bitter substance) that stands for cooling gel-like liquid in the leaves. Vera means "the only real"
The Aloe is also called "saber" (Arabic) in Arabic, because of the slow growth.

The Aloe Vera needs little water, from spring to autumn but just enough to prevent the root ball from drying out completely. Give less water from autumn and winter.

Spraying is not necessary but can occasionally be used to remove any dust from the leaves in order to preserve the ornamental value.

The Aloe Vera can be put in the partial shade but also in full sun. However, let the plant acclimatise to a spot from the direct sun after purchase. Then everywhere where there is natural light.

The Aloe Vera does not need any food.

If the leaves of the Aloe Vera turn brown and soft, this is usually due to too much water. If this is the case, you can simply cut off the soft leaves and of course pay more attention to the irrigation. In case of too much sun, the leaves can turn yellow. In this case, put the plant a bit further away from the window. After habituation you can give the plant more sun again.

The Aloe Vera is a plant that can heal itself. After cutting off the leaves, a thin membrane will appear on the wound of the leaves within a few seconds. This wound is made up of the juice of the plant. This juice contains a composition of healing substances. The juice changes to a rubbery layer within a few minutes. This layer protects the wound of the leaf, so that the moisture loss stops. The plant is non-toxic!

5 stars based on 3 reviews
Add your review 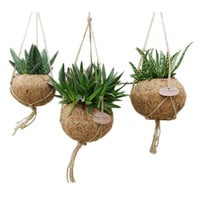