Add to wishlist
The Cambria comes in many shapes and sizes, large and small "often beautifully drawn" flowers in 8 to 10 colors. An orchid where you can have up to 6 weeks of fun and can "bloom with a little patience" again.
Share this product
Ordered before 10:00 pm, shipped tomorrow.
International shipping
Special transport-resistant packaging.
Always fresh from our Dutch growers!
Customers rate FloraStore 9.3/10
Information

The Cambria does not occur in nature but is a cross between different types of orchids, this is the Odontoglossum, Cochlioda, Miltonia, Oncidium and Brassia. The first Cambria (the Vuylsteeara Plush) was developed around 1900 by the Belgian Charles Vuylsteke

Appearance of the Cambria Orchid The cambria orchids are enormously varied in size and shape: from a centimeter to ten centimeters and from star-shaped to almost round. The flowers are nicely drawn. The colors brown, red and purple predominate, but there are also pink, and orange Cambria orchids and even a small number of white and yellow with brown-purple markings.

Give the amount of food indicated on the packaging once a month in the summer. In the winter once every two months half of it.

The Cambria thrives best at temperatures between 15 and 25˚C.

Once the Cambria has finished, you can cut and treat the old branch in its entirety in the same way as during flowering. The Cambria can bloom again after about nine months. The plant develops one or more new shoots. When a new shoot has grown, a hard green disc is created, a kind of appearance bulb. To form new buds, the cambria needs a rest period from the moment the false bulb is completely hard and filled. Give less water for eight weeks: once every two weeks is sufficient. Put the Cambria in this period in a place where it is 15 to 17 ˚C, but not in the dark. Give more water when the new flower stalk is visible. The Cambria may then return to its old place.

Cambria Orchids can be outdoors in spring and summer, but not in full sun. The temperature must not fall below 9˚C. When the pot has grown completely full, you can repot the Cambria. Use only Orchid soil with a large amount of bark (Orchid soil). Give the Cambria extra nutrition for the first two months after repotting.

A bright spot without direct sunlight. A north-facing window for the cambria or a shielding from the sun would be fine.

Arrived well-packed in beautiful condition. Very pleased with this. Would definitely recommend this company and return for future purchases. 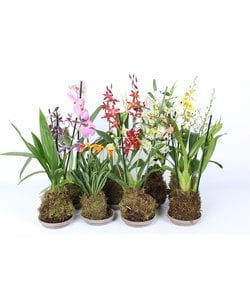 55 cm 12 cm
Orchideeën Exclusive mix 2 branch
€18,50
Available
Add to cart
Didn't find what you're looking for?
Let us help!
Top quality plants fresh from our Dutch growers!
Delivery in the European Union
Before 22:00, shipped next business day
By using our website, you agree to the usage of cookies to help us make this website better. Hide this message More on cookies »