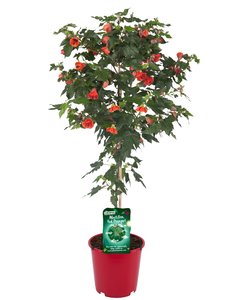 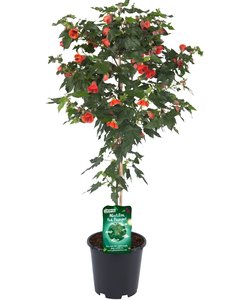 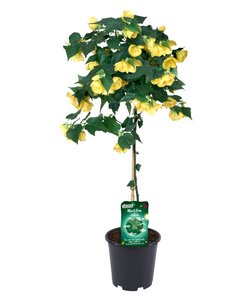 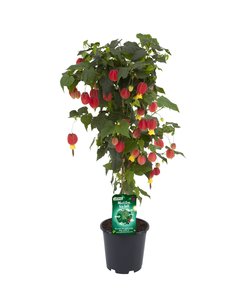 Abutilon comes from South America. In countries like Chile, Uruguay and Brazil, the native shrub. He belongs to the large family of the candles herbaceous (Malvaceae). This family includes among others, Hibiscus, Lavatera, Hollyhock and cotton (Gossypium). Abutilon is particularly suitable as a conservatory plant for a place on the balcony and terrace and to a lesser extent for a place in the border.

Abutilon produces rather light, thin twigs, giving the plant a mostly overhanging shape. Of some species depends on the flower with its five sepals down. The sepals have the shape of a sphere. These species are mainly pollinated by hummingbirds. Other species on the other hand have a flower, which is wide open. This flower shape reminiscent of Hibiscus. The species from Uruguay and Brazil retained their leaves and evergreen. The kinds of cool parts of Chile are mostly deciduous. Abutilon comes in many colors: red, orange, yellow, white, mauve, scarlet, mauve purple. There are also gold or white speckled leaves.

Abutilon grows and thrives like on a wind-sheltered, warm place. Put the plant in full sun; tempered sunlight is the best. A bush, which is in full sun, let the leaves curl and lose it eventually leaves. Abutilon also grows well in a hanging basket. The flowers and the shape of the bush will then, in particular, in image. Equip the bush regularly and water every two weeks in liquid plant food for flowering plants. Put Abutilon only outside when there is absolutely no frost arrives. Due to a low-temperature growth stagnates. Winter on the bush at a minimum temperature of between 6-12 ° C.

Who Abutilon put in the garden and think that without looking it goes well could be disappointed with the bush. In that case, fall off sheets, but that's okay. Wintering at a temperature of between 18-20 ° C. provides continuous bloom, which is however less as in the flowering season. In the latter case, the blades also remain on the bush.

The shrub is visited by caterpillars, aphids and flea beetles. Put the bush therefore not in the garden or border. Spider mites and white fly can also be unpleasant guests. Spray the plant in that case respectively Promanal and Spruzit (Ecostyle) or use a insectenpin (Provado Insectenpin Bayer).

Abutilon x hybridum: short all side shoots until about ten centimeters. A bush with only one main shoot is cut to half its length. Bush will branch out thereby.

Abutilon megapotamicum: cut bare branches / stems back to a proper button on a good side shoot. Shortly shoot growth from the previous year to one third of the length.

Abutilon vitifolium: prune this species after flowering in summer. Always prune dead and damaged stems road. Cut side shoots with two-thirds of their length back. Nothing doing. Otherwise, the natural form can thus be offset by the many side shoots, which then arise.

Top quality fresh from our Dutch growers!
Delivery in the European Union
Before 22:00, shipped next business day
Filter your products
By using our website, you agree to the usage of cookies to help us make this website better. Hide this message More on cookies »