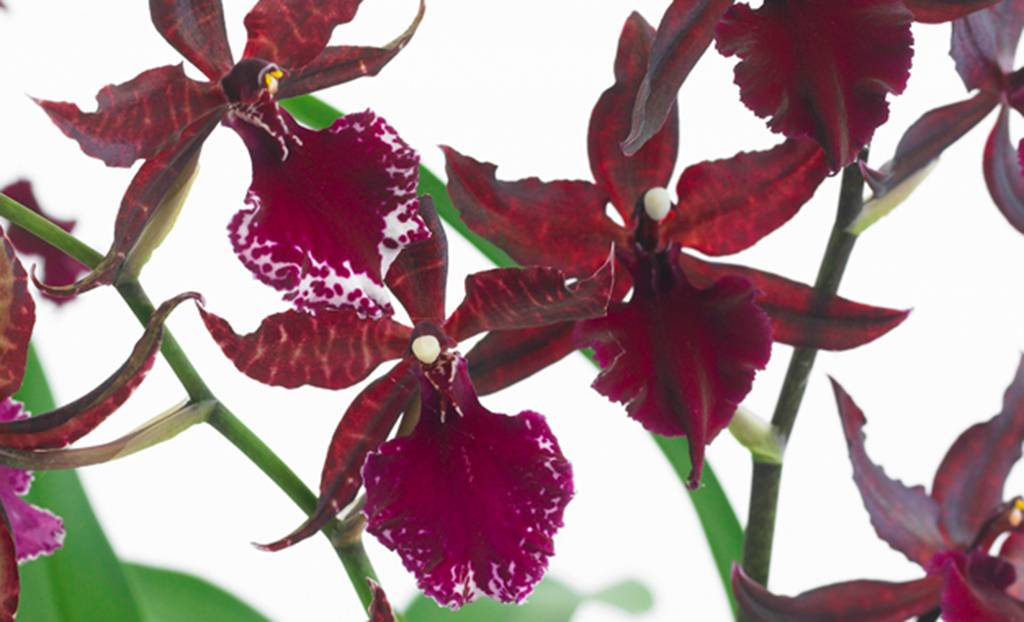 The Cambria is a cross between different genera of plants and therefore is not found in nature. Cambria-like is a collective name for a group crossed orchids whose "ouder'planten come from all over the world. Around 1900 the Belgian Charles Vuylsteke developed the first Cambria, Cambria Vuylstekeara 'Plush'. The Cambria is created from the Odontoglossum, Cochlioda, Miltonia, Oncidium and Brassi.

Cambria-species are not widely grown and are mainly available from specialist retailers.

The cambria orchids are enormously varied in size and shape: a half centimeters to over ten centimeters and of asteroid almost round. The flowers are beautifully drawn. Shades of brown, red and purple predominate, but there are also pink, orange and brown Cambria orchids and even a small number of white and yellow with brown purple drawing.

Put the Cambria Orchid on a light place, but not directly in the sun. The average flowering time is six weeks.

Dip the Cambria Orchid in the summer once a week and in winter once every seven to ten days. Do this by putting the Cambria five to ten minutes in a bowl of water at room temperature. Let the Cambria drain well before you reset. Give more water, if the bulb dries.

Add in the summer once a month food to the water. half amount of food in the winter once every two months.

The Cambria grows best at temperatures between 15 and 25 ° C.

Cut, as the Cambria has finished, the old branch as a whole way and treat the Cambria hereinafter the same way as during flowering.

The Cambria can start flowering again after about nine months. The plant is developing one or more new shoots. When a new shoot has grown, there is a green hard drive, a kind schijnbulb. In order to form new buds, the cambria needs a rest period from the time the pseudo-bulb is completely hard and filled. Give than eight weeks less water: once every two weeks is sufficient. Put the Cambria during this period in a place where it is 15 to 17 ˚C, but not in the dark. Give more water if the new flower stem is visible. The Cambria may go back to its old place.

Cambria Orchids can in the spring and summer outside, but not in full sun. The temperature may not fall below 9C. If the pot is completely full grown, you can repot the Cambria. Please use only Orchids Land with a fair amount of bark (Orchids ground). Enter the Cambria the first two months after potting extra nutrition.

For more information and inspiration on these and other Orchids You can take a look at www.orchidsinfo.eu .