The Brugmansia originates from tropical areas in South Africa and South America, and the plant is also wild in large parts of Asia. There are different types of Brugmansias, of which the Brugmansia Suaveolens is the best known and most beautiful.
The brugmansia is a large container plant.

All Brugmansias can withstand the full sun, but in half shade they bloom longer and throughout the summer. The plants love a lot of water. Breeding 1x per week during the growing season. Remove faded flowers immediately. The plant is not hardy, so bring it in for the winter. Cut back to half in the autumn and put it in a light, frost-free place with an almost dry root ball. Keep pot stopper slightly moist. In early spring, repot if necessary, prune back and gradually turn warmer. The plant will run out again. It is advisable to top up regularly.

From June the flowers sprout to the 1st frost, always with a number at the same time.

If you follow the care tips, the plant again gives flowers.

The Brugmansia's calyxes have a pleasant sweet smell.

Did you know that:

Brugmansia belongs to the family of the nightshade-like, which also includes the tomato and the potato.

For centuries the 'Brugmansia' was called datura or thorn apple. Only in the last decades of the last century she got her current name: "Brugmansia".

The name is derived from Mr. SJ Brugman. This was a Leiden professor, who in between was also personal physician to Louis Napoleon.

Brugmansia is a dangerous beauty, all parts of the plant are poisonous. 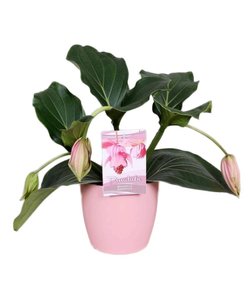 55 cm 17 cm
Medinilla Magnifica 5 button in attractive gift box
€28,50
Available
Add to cart
Didn't find what you're looking for?
Let us help!
Top quality fresh from our Dutch growers!
Delivery in the European Union
Before 22:00, shipped next business day
By using our website, you agree to the usage of cookies to help us make this website better. Hide this message More on cookies »