Super beautiful plant. So big and lucious. It is enourmous! :)
I received it very fast and in perfect condition. 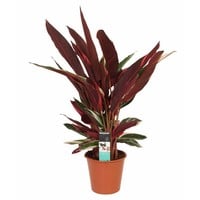