Add to wishlist
FloraStore has recently acquired a beautiful collection of Crassulas. Different types and sizes ensure that you can easily combine these plants. Originally from South Africa, this plant is also known as a money tree.
Share this product
Delivery within 2-5 businessdays
International shipping
Special transport-resistant packaging.
Always fresh from our Dutch growers!
Customers rate FloraStore 9.3/10
Information

All cacti form the cactus family (Cactaceae). The non-cacti we usually call succulents, although we should really say sap plants, these come in several families such as the afternoon flower family, the thickleaf family (Crassulaceae), the silk plant family and the spurge family (Euphorbiaceae).

Where do the succulents come from?

They can be found all over the world. Many think that they all come from arid desert areas, but sometimes they are in places where there is more precipitation per year than in Belgium. However, this precipitation falls in a relatively short period, during which these plants absorb enough water to overcome the next drought period.

All cacti come from America. They occur from Canada to Argentina and Chile, from the high mountains to sea level. It is clear that within such a distribution area there are enormous differences in climatic conditions and soil conditions. The cacti found in other areas (Mediterranean) have all been imported.

Also many succulents are from the new world, Agave, Echeveria, Dudleya and Lewisia to name a few. Africa supplies us with the afternoon flowers, many carrion flowers, Aloe-like and spurge-like. Asia and Australia supply only a few varieties.

A sunny windowsill or bay window provide a good place for cacti and succulents. Since a lot of light is needed, a location on the south, southeast or southwest is the ideal solution.

A small part of the succulents is hardy and can therefore be used in the garden. Many enthusiasts place their cacti and larger succulents in the garden between the border plants or on the balcony during the summer.

But as a true enthusiast who has the space for it, a conservatory is of course the place to house his or her collection.

Most cacti and many succulents have their growing period in our summer. This means that growth will gradually start during the spring months. The main growth is then in the summer months, sometimes with a short rest period in the heat of summer, then slows down and finally stops in late autumn and winter. Winter rest is essential for most plants. A temperature of 6 to 8 ° C is sufficient for them. Many species tolerate even lower temperatures, provided they are sufficiently dry, other species such as Melocactus and Uebelmannia must have higher temperatures around 15 to 18 ° C.

The following combinations of factors always belong together:

Watering is one of the most difficult things in the cactus hobby. Following are a few tips:

In nature, the plants can develop their roots unhindered. They look for food in all directions, even if they grow in crevices they still have plenty of opportunities to find food.

In a pot, however, the roots cannot leave so that they fill the pot completely or even grow out of it after a while. In addition, after some time the soil will become saturated with lime or fertilizer residues.

In principle, this is possible all year round, even in winter, but then the soil must be dry and have the same temperature as the old soil. However, the best period is from March to September. However, never transplant plants that are in bloom. I transplant myself when I have the time.

The cuttings of cacti and succulents is generally very easy. Cuttings are best done in warm and dry weather. With cacti and succulents that form side shoots, one can cut off a shoot with a sharp knife, often they already have roots, and are then planted in cuttings. Certainly not in water because then they are guaranteed to rot.

When you have made a wound, you must first let it dry until a wound tissue has formed. If the cutting is sufficiently dry, it can then be potted.

Certainly do not water when a cutting has just been potted.

If the plant looks tense and new growth appears, the cutting is rooted and you can water it again and it can also tolerate some nutrition. Succulents can even grow further from a leaf that you simply place on the ground. And in my conservatory, they even grow in the dirt between the grates at the bottom of the hallway. So you see, apparently everything shouldn't be so sterile. As long as the plants are strong and healthy enough.

To get more plants quickly, you can cut off the head of a larger plant and let it root. Shoots will then be formed on the remaining piece that you can also take cuttings later. 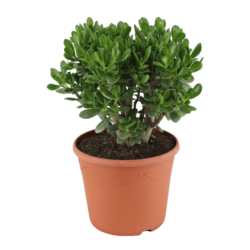 16 cm 11 cm
Aloë aveo
€4,95
Available
Add to cart
Didn't find what you're looking for?
Let us help!
Top quality plants fresh from our Dutch growers!
Delivery in the European Union
Fresh delivery within 2-7 businessdays
We use cookies to personalize content and advertisements, to provide social media features and to analyze our website traffic. We also share information about your use of our site with our social media, advertising and analytics partners. These partners may combine this information with other information that you have provided to them or that they have collected based on your use of their services. You agree to our cookies by continuing to use our website. Hide this message More on cookies »