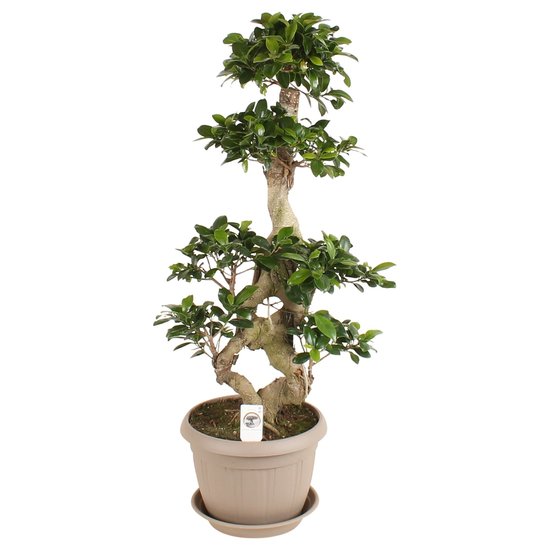 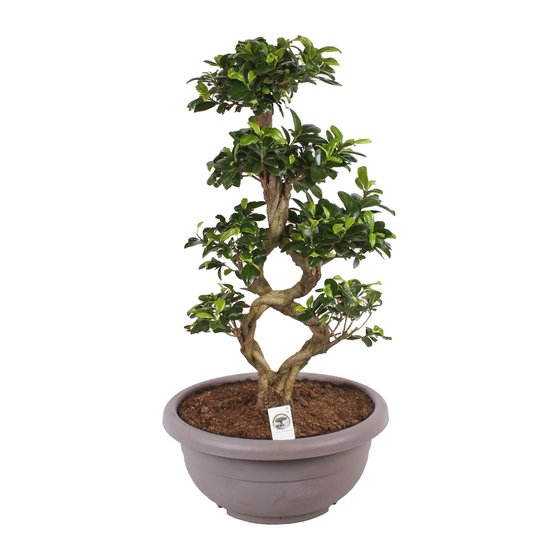 Add to wishlist
Ginseng is the Chinese name of ginger root to which special medicinal properties are attributed. In addition to its artistic appearance, the Ficus Ginseng has a positive influence on the environment and health.
Share this product
Delivery within 2-5 businessdays
International shipping
Special transport-resistant packaging.
Always fresh from our Dutch growers!
Customers rate FloraStore 9.3/10
Information

A Ficus Ginseng "also called Ficus Microcarpa) has whimsical branching aerial roots with firm, oval and shiny leaves .. The robust bonsai gives you a relaxed feeling and looks different from every angle, so give it the attention it deserves .

Ficus Ginseng originally comes from Asia and really feels at home there. The roots of the houseplant are still grown in China and Malaysia, where they grow for about fifteen years. Then they are imported by growers and grown as bonsai. By the time the Ficus Ginseng is in your living room or office, it has already had a whole life.

With proper care, Ficus microcarpa Ginseng can be kept for years.

Place this houseplant in a sunny spot. Possibly in the summer in partial shade.
The plant requires a moderate amount of water, more in summer than in winter.
Never leave water in the bowl or saucer, because the plant does not like wet feet.
Feed regularly. The Ficus can also go outside in the summer, preferably in the shade.
It is also possible in the living room, but then you should keep the root ball slightly moist.
Just like a Bonsai, this plant can be further shaped.
Runners that can disfigure the shape of the Ficus can be trimmed without any problems, so that the decorative wood remains clearly visible.

A Ficus Ginseng should not be missing from your collection of potted plants.

food
€5,99
Currently not in stock
Add to cart
Didn't find what you're looking for?
Let us help!
Top quality plants fresh from our Dutch growers!
Delivery in the European Union
Fresh delivery within 2-7 businessdays
We use cookies to personalize content and advertisements, to provide social media features and to analyze our website traffic. We also share information about your use of our site with our social media, advertising and analytics partners. These partners may combine this information with other information that you have provided to them or that they have collected based on your use of their services. You agree to our cookies by continuing to use our website. Hide this message More on cookies »