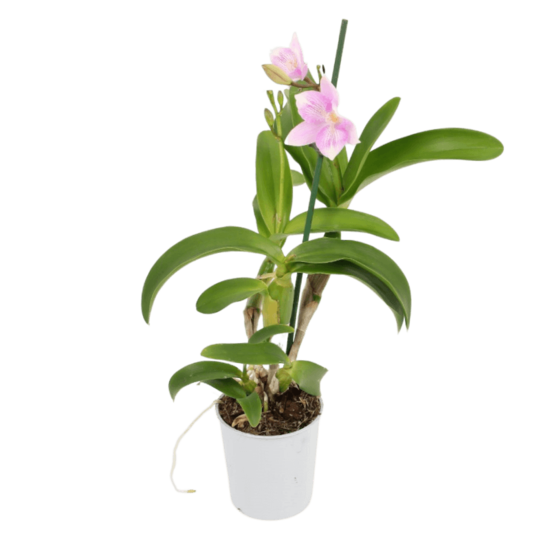 Add to wishlist
The Cattleya has the most varied appearance of all orchids and is notable for its spectacular colours. The flowering period is two to three weeks.
Share this product
Delivery within 2-5 businessdays
International shipping
Special transport-resistant packaging.
Always fresh from our Dutch growers!
Customers rate FloraStore 9.3/10
Information

The Orchid is available all year round at the better florists and garden centers. The peak is in the spring and autumn.

Appearance of the Orchid

The Cattleya has the most varied appearance of all orchids. There are large and small flowered Cattleyas. The small-flowered varieties have more flowers per stem than the large-flowered ones. The Cattleya stands out because of its spectacular colours. The Cattleya is often fragrant, especially when exposed to daylight.

The Cattleya likes a light spot, but do not place it in direct sunlight.

In winter, watering once a week is sufficient. Depending on the location, this may be done a little more often in the summer. Lukewarm water is best for the Cattleya. Dip the Cattleya until no more bubbles appear, then drain well before putting it back.

The ideal temperature is between 15Â°C and 25Â°C.

Treat the Cattleya after flowering in the same way as during flowering. When the flower has finished blooming, the flower dries up on its own and falls off. There is no need to cut the branch.

After flowering, a new growth shoot appears on the underside of the spent bulb (mature shoot). A new flower stem emerges from the sheath, at the base of the leaf. The sheath provides protection in the early stages. When the young shoot is fully grown, it will flower again. This entire process takes six to nine months.

Put the Cattleya in a larger pot every two years. Use fine bark (Orchid Soil). It is important to keep the Cattleya growing vigorously, because only the new shoots give flowers.

Be careful with full sun: These plants should not be placed in full and direct sun, because there is a risk of burning. A bright spot where the sun does not shine directly is good. A north-facing window or shade from the sun would be fine.

Dipping once a week: A potted plant with the pot in a container with water indicates that this plant likes to be dipped with the root ball in the water for a short time (10 minutes). After dipping, the water should drain.

Feed once a month: This plant has a moderate nutritional requirement. Feeding once a month with food respecting the concentration recommended on the product is sufficient.

The Cattleya is loved for its spectacular colors. 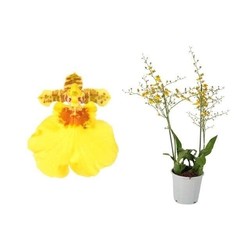 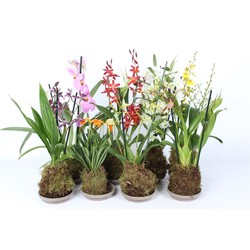 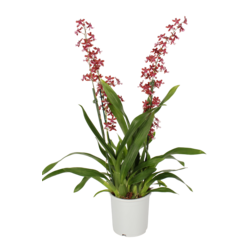 80 cm 17 cm
Orchideeën Oncidium 'Cherry Baby' 2 branch 17 cm
€32,95
Available
Add to cart
Didn't find what you're looking for?
Let us help!
Top quality plants fresh from our Dutch growers!
Delivery in the European Union
Fresh delivery within 2-7 businessdays
We use cookies to personalize content and advertisements, to provide social media features and to analyze our website traffic. We also share information about your use of our site with our social media, advertising and analytics partners. These partners may combine this information with other information that you have provided to them or that they have collected based on your use of their services. You agree to our cookies by continuing to use our website. Hide this message More on cookies »