Add to wishlist
The exclusive Medinilla is an asset to any living room. With proper care, you can enjoy up to 3 months of this wonderful plant.
Share this product
Delivery within 2-5 businessdays
International shipping
Special transport-resistant packaging.
Always fresh from our Dutch growers!
Customers rate FloraStore 9.3/10
Information

Light requirements: lots of light in the winter sunlight, summers in the sun!

Origin
There are about 400 species of Medinilla, of which until recently only the Magnifica as a houseplant was offered. The family name of the Medinilla is Melastomataceae. The family has approximately 3,000 species of good in the Neotropics, 240 species in Africa and 230 in Madagascar and about 1,000 in Asia. Medinilla magnifica originates in the Philippines and is an epiphyte: it grows on trees in the mountains of the tropical country, but it does not withdraw its foods like parasites.

The Medinilla's are originally from the tropical zones of the ancient world, from Africa, Madagascar and South Asia to the Western Islands in the Pacific Ocean. There are 80 species of Medinilla in the Philippines, which are increasingly rare because there remain fewer and fewer forests. The genus Medinilla owes its name to J. de Medinilla, governor of the Mariana Islands in 1820.

Care
Temperature between 17 and 25 degrees in the winter lots of light, preferably direct sunlight in summer but not full sun !, the Medinilla needs little water, it is early enough for the plant to give a glass of water when the leaves hang limp slightly . During flowering not feed the plant is delivered with a voldoede food. After flowering time give once every two weeks feeding.

Flowering again
After flowering is recommended to remove the old flowers out to speed up the grow. The plant will then where have been the first flowers will make new leaves. If these are grown, it is important to know what to put the plant cooler (16 to 17 ° C) in order to trigger bud formation in the young leaves. Note that the plant continues to need light. If the buttons are clearly visible, the plant will return to its normal temperature so that the buds can develop into a new flowers. Repotting is basically the whole year, only during flowering, it is not advisable because of the fragility of the flowers. 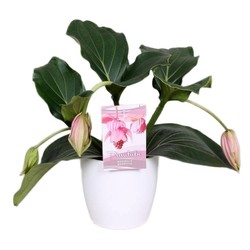 40 cm 17 cm
Medinilla Magnifica pinubato
€21,50
Available
Add to cart
Didn't find what you're looking for?
Let us help!
Top quality plants fresh from our Dutch growers!
Delivery in the European Union
Fresh delivery within 2-7 businessdays
We use cookies to personalize content and advertisements, to provide social media features and to analyze our website traffic. We also share information about your use of our site with our social media, advertising and analytics partners. These partners may combine this information with other information that you have provided to them or that they have collected based on your use of their services. You agree to our cookies by continuing to use our website. Hide this message More on cookies »