Add to wishlist
The exclusive Medinilla Magnifica is an asset to any living room. With proper care you can enjoy this beautiful plant for up to 3 months. Due to transport sensitivity, these plants are delivered in bud
Share this product
Ordered before 10:00 pm, shipped tomorrow.
International shipping
Special transport-resistant packaging.
Always fresh from our Dutch growers!
Customers rate FloraStore 9.3/10
Information

The Medinilla needs little water, it is early enough to give the plant a glass of water if the leaves are slightly limp.

The Medinilla finds a spray turn pretty good at its time, after all the Medinilla is originally from the tropics. A spraying is not necessarily necessary, but it does increase the humidity, which ultimately benefits the plant.

Do not feed during flowering, the plant is supplied with sufficient food upon delivery. Give food once every two weeks after flowering. Use flowering plant food from Pokon for this

After flowering it is advisable to remove the old flowers to speed up the growth. The plant will then, where the flowers used to be, start making new leaves. When these have grown, it is important to cool the plant (16 to 17 ° C) to start budding in the young leaves. Note that the plant continues to need light. If the buds are clearly visible, the plant can return to the normal temperature, allowing the buds to develop further into a new splendor of flowers.

Repotting can in principle be done all year round, only during flowering is it not advisable because of the fragility of the flowers.

If the Medinilla becomes too large and you do not want to repot it, you can also choose to remove the last grown shoots. Then cut the stem at the bottom with a pair of secateurs or a sharp knife.

You can try to multiply a Medinilla yourself. You can do this by cutting off a young stem at the base. Cut the leaves to about 5 cm from the stem. By placing this stem in cutting soil and then leaving it at a temperature of 20 to 25 ° for 6 to 8 weeks, the plant will be rooted and you can place it in a pot.

The Medinilla is known for the beautiful and large flower clusters. Nowadays the Medinillas are available almost all year round. With proper care, these can flower for 2 to 4 months.

Growth sugars are produced during the flowering period. This is expressed by a white rash on the leaf. These growing sugars are not harmful to the plant.

Mealybug sometimes occurs and can be controlled by spraying off the mealybug with a fairly strong jet of water. Schildluis is best treated with a pesticide. This also applies to mealybug if the water jet has no effect. Multiple treatments are then required.

With a medinilla magnifica you have a special plant.

I ordered several medinillas to check the packing, as these are complicated plants to ship.
Well, everything came perfect, not a leaf damaged. Excellent service, I shall order again.

Ordered a rather rare species of flower that I could not find anywhere else for such an excellent price, which arrived swiftly to Germany, was packaged incredibly well and is of a really good quality. There is nothing bad to say.
Pros:
- excellent packaging
- excellent quality of the received plant
- swift shipping with tracking 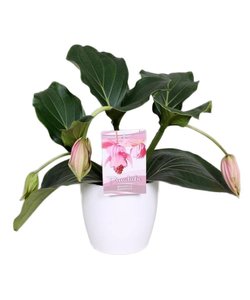 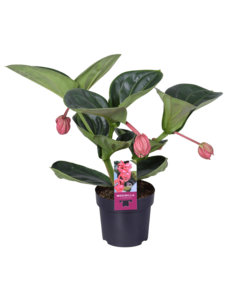 Plantenvoeding Pokon flowering plants 500ml
€4,99
Available
Add to cart
Didn't find what you're looking for?
Let us help!
Top quality plants fresh from our Dutch growers!
Delivery in the European Union
Before 22:00, shipped next business day
We use cookies to personalize content and advertisements, to provide social media features and to analyze our website traffic. We also share information about your use of our site with our social media, advertising and analytics partners. These partners may combine this information with other information that you have provided to them or that they have collected based on your use of their services. You agree to our cookies by continuing to use our website. Hide this message More on cookies »