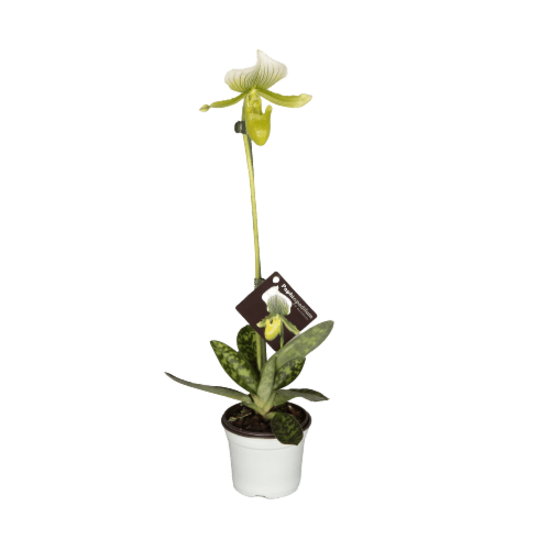 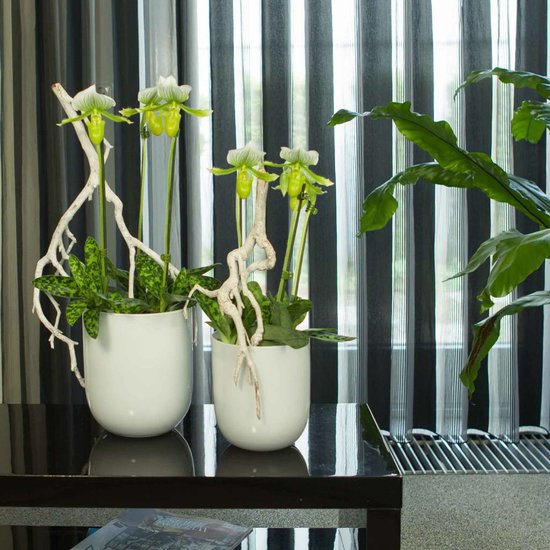 The botanical species of the Paphiopedilum Maudiae Femma are found in the jungles of the Far East and Indonesia. They mainly grow in the humus layer of the forest and sometimes on stones. They are rarely found in trees.

The shoe-shaped lip serves as an insect trap; flying insects are lured by fragrances and the promise of nectar in the flower. They can only exit through a narrow opening, passing the pistil and stamens and getting the pollen on their bodies. With the next flower, the pollen then ends up on the pistil

The Paphiopedilum Maudiae Femma likes a light pot mixture. Water once a week, a little more in the summer. Make sure that no water remains at the bottom of the outer pot. Submerging with rainwater for approximately ten minutes is preferred.

The orchids need very little fertilizer. Give orchid food once every two or three weeks, but only use half the amount of food indicated on the bottle. This orchid is easy to grow in the living room. Do not put the Paphiopedilum in full sun. Cold nights (12 to 15 ° C) in the spring promote the formation of flower buds.

Each stem blooms only once and then dies. Cut the old stem as deep as possible. The Paphiopedilum flowers on a new shoot after about nine months. When transplanting, make sure that the base of the Paphiopedilum is under the potting material, otherwise root growth will stop. If the Paphiopedilum becomes too large, it can easily be divided into pieces of two or three plants. The Paphiopedilum does not like to be in a pot that is too large. Repotting in orchid soil once every three to four years is sufficient.

Because a somewhat lower night temperature stimulates bud formation, most orchids flower in the middle of winter. Paphiopedilum is a slow growing crop, it takes about three years for the Paphiopedilum to be old enough to flower. With sufficient new shoot (leaf) growth, it can then bloom every year. The more shoots the Paphiopedilum produces, the greater the chance that the Paphiopedilum will flower with more flowers.

The Paphiopedilum Maudiae Femma is a graceful Orchid with a beautiful pattern on the flower.

I ordered plants to the UK via the website.

Pros:
The plants were extremely well packaged and good specimens. They arrived in a couple of days! great service!

Very good indeed.
Sterke punten:
I'd never heard of this company before 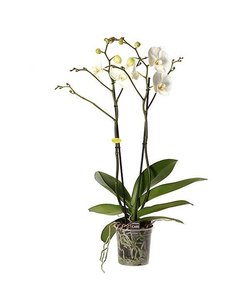 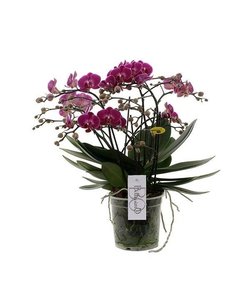 50 cm 15 cm
Phalaenopsis Bellissimo - 100 + flowers !!
€44,50
Available
Add to cart
Didn't find what you're looking for?
Let us help!
Top quality fresh from our Dutch growers!
Delivery in the European Union
Before 22:00, shipped next business day
By using our website, you agree to the usage of cookies to help us make this website better. Hide this message More on cookies »