The Curcuma (also called Siamese or Thai tulip) belongs to the exotic sounding Zingiberaceae family. She is originally from Thailand, but also occurs in India, Malaysia and Pakistan. The Curcuma has been cultivated there for more than 5000 years. Initially, the carrot was only used to color clothes, only later did they discover the special taste and the healing and cleansing effect for the entire body.

This beautiful relative of the ginger is probably best known for its bright yellow color, curcumin, which is widely used in food. The rhizome of some varieties are edible and known in the culinary world under the name of yellow root, koenjit or turmeric. This is used for flavoring and coloring food. Our Curcuma, however, is an ornamental plant that unfortunately does not produce this herb, but the ease of care and the calming jungle atmosphere that this plant causes make up for that lack.

Your ornamental plant Curcuma is not suitable for consumption. Specially grown varieties are used for cooking with Turmeric.

The Curcuma is a real sun worshiper and therefore prefers a place with a lot of sunlight. A window frame, for example, is a great place for the Curcuma. If it is above 15 ° C, the Curcuma can also be placed outside.

Keep moist, the potting soil must not dry out:

The Curcuma comes from the rainforest and is therefore used to a lot of water. In fact, she prefers moist potting soil. Watering twice a week is generally sufficient. Just make sure that no water remains at the bottom of the pot, the roots of the Curcuma will rot if they are left in the water for a long time.

With sufficient light, water and nutrition, a flower will continue to bloom for about 3 weeks. When the flower has finished flowering, cut it as low as possible above the ground so that the plant can put all the energy into a new flower. A Curcuma can give 2 to 5 new flowers so that you can enjoy them for a long time. Your ornamental plant Curcuma is not suitable for consumption. Specially grown varieties are used for cooking with Turmeric.

This new Clematis is a beautiful double flowering pink Clematis. This Clematis gives an abundance of half to very full light pink flowers at a young age. Only 96 pieces available !!
View the clematis! 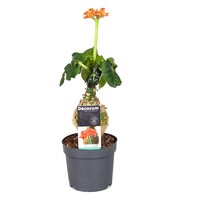 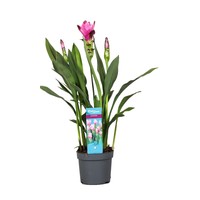