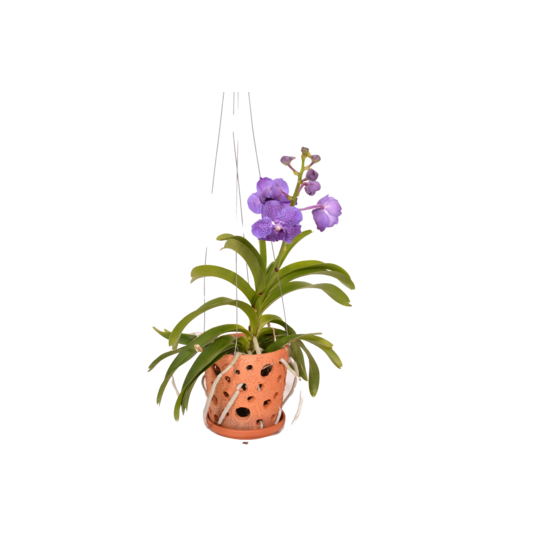 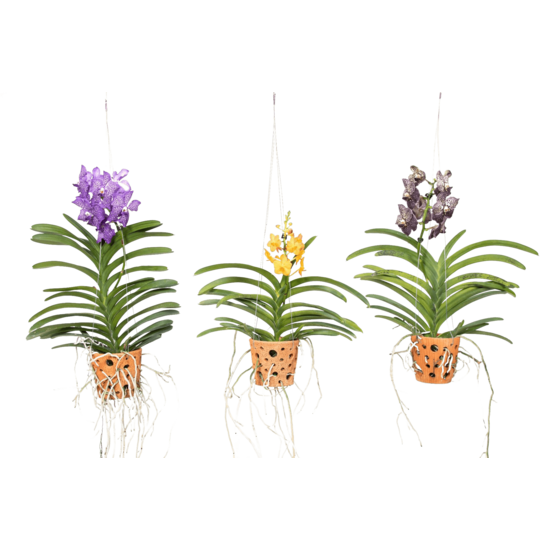 Add to wishlist
Vanda, the Jewel among orchids! If you follow the care tips below, you will enjoy this special plant for years to come. PLEASE NOTE: the colour of each plant is different and may vary.
Share this product
Ordered before sunday 22:00, shipped on monday.
International shipping
Special transport-resistant packaging.
Always fresh from our Dutch growers!
Customers rate FloraStore 9.3/10
Information

The number of orchid species in nature is estimated at 20,000. This wide variety also includes very exclusive genera. Vanda is one of them. It is perhaps the most mysterious genus of orchids, with a unique display of colors and exotic aerial roots!

The Vanda is originally found on the southern flanks of the Himalayas and in the region from India to South China. The orchids grow high in the trees of the jungle. With its long roots, the plant establishes itself in trees. The roots feed on the morning dew and rain.

The Vanda is sold both as a flower and as a flowering plant. The flowers of the Vanda have a long shelf life: the consumer can enjoy flowering plants and cut branches for weeks in the living room. Due to its slow growth, the Vanda is very robust and the plant can handle less favorable conditions much better than other houseplants.

Click here for a video of our Vanda grower that shows how you can take the best care of your Vanda in order to enjoy it for an extra long time.

Vandas do very well at normal room temperatures, between 18 and 27 degrees Celsius. With the right temperature and a lot of light, the plant will grow actively all year round.

light
A Vanda orchid needs a lot of light to flower. Avoid direct sunlight in the summer: this will make the leaves of the plant fade and light green. Leaves can also shrivel. Too little light will cause the leaves to turn dark green. The plant will then no longer bloom. When opening the flower, it must still come to color.
Extra light in the flowering stage ensures a beautiful bright flower color.
After ten days, the flowers have grown to their full size.

Water
Fill the vase with water twice a week during sunny, warm periods. In cloudy and cool periods this is only necessary once a week.
When filling the vase with water, the roots absorb the water like a sponge. After about thirty minutes, no more air bubbles appear and the roots are saturated. Then remove the remaining water from the vase. The plant has now stored enough water in the roots for a number of days.

Fertilization
Use a regular, balanced fertilizer for the Vanda. This is available at a florist or garden center. Add the fertilizer to the water once a month.

New bloom
When the flowers have finished blooming, the flower branch can be cut out. After a few months, depending on the amount of daylight present, a new branch will appear. Place the plant in a cool place for several weeks to encourage reflowering. This place should never be colder than 15 degrees Celsius.

In the meantime, the Vanda must be watered normally: the plant does not have a rest period like other orchid species. You don't have to put it away in the dark: leave the Vanda in a light place. 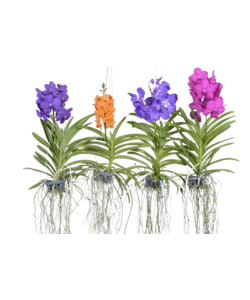 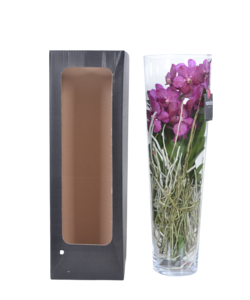 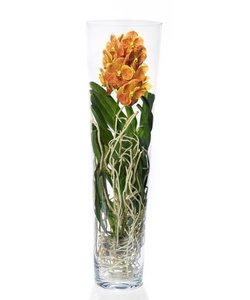 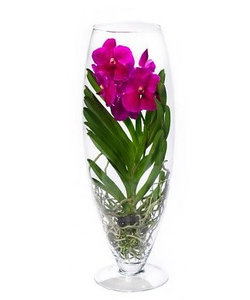 70 cm 24 cm
Vanda Champagne
€75,50
Available
Add to cart
Didn't find what you're looking for?
Let us help!
Top quality plants fresh from our Dutch growers!
Delivery in the European Union
Before 22:00, shipped next business day
By using our website, you agree to the usage of cookies to help us make this website better. Hide this message More on cookies »