The Calla is perfect as a houseplant, but can also function well as a patio plant in the summer. The calla is in a nice pot, Ton sur Ton!

The Zantedeschia Calla is originally a South African swamp plant and comes from the Arumeake family (Araceae). This family consists of monocotyledonous plants. The flowers are collected on a fleshy ear surrounded by a bract. This bract is often attractively colored.

Calla is a swamp plant that anchors itself firmly in its banks. The plant grows from South Africa to Malawi, often in places where rainwater drainage is impeded. This creates a short swampy situation in which Calla stores moisture in its bulbs. And they help him through the dry periods.

The tubers of the Callas come from California. These tubers are two years old and are potted in the nursery. The cultivation time depends on the species and the period in which it is planted and varies between 10 and 16 weeks. The Calla is available during the period from February to December.

Zantedeschia Calla is an easy plant and gives weeks of flowering pleasure. 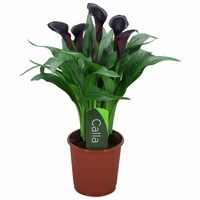 The Calla is perfect as a houseplant, but can also function well as a patio plant in the summer. The calla is in a nice pot, Ton sur Ton!