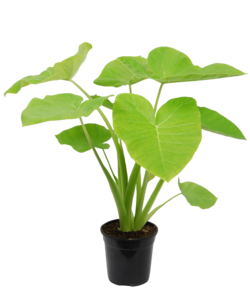 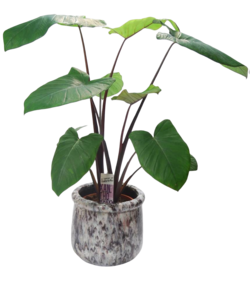 From Central America, Xanthosoma sagittifolium ended up in West Africa via slave transport in the 17th century. There the plant was eaten a lot because of the starchy tuber and the leaves and the stems that are full of proteins and vitamins. The food crop is still popular in Cuba, Costa Rica, the Philippines and in Suriname. In these countries the tuber is a basic ingredient of the casserole pom.

The novelty Xanthosoma sagittifolium Frozen Planet has another remarkable feature, an attack on the leaf reminiscent of a ripe layer, as if the leaf is frozen.

Top quality plants fresh from our Dutch growers!
Delivery in the European Union
Before 22:00, shipped next business day
Filter your products
By using our website, you agree to the usage of cookies to help us make this website better. Hide this message More on cookies »