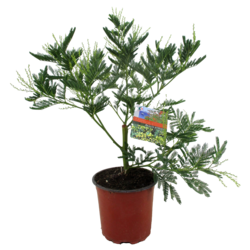 The Mimosa does not need to be watered often, but it is possible to remove the dust from the leaves.

The Mimosa is gravely in lots of light, this can even be direct sunlight, but then let the plant get used to it gradually.

The Mimosa does not need much nutrition but if you think it can use it you can always.

The Mimosa is best repotted every other year as this plant grows fairly quickly. When repotting the plant, make sure it gets fresh potting soil.

The Mimosa pulls up its leaves every night because it then goes to 'sleep' so don't be afraid that something goes wrong with your plant. You may even hear a sound that is the rustling of the leaves.

The Mimosa is best kept up to date. Since this plant grows fairly quickly, it is not bad to prune it after flowering.

The Mimosa is non-toxic.

Top quality plants fresh from our Dutch growers!
Delivery in the European Union
Fresh delivery within 2-7 businessdays
Filter your products
We use cookies to personalize content and advertisements, to provide social media features and to analyze our website traffic. We also share information about your use of our site with our social media, advertising and analytics partners. These partners may combine this information with other information that you have provided to them or that they have collected based on your use of their services. You agree to our cookies by continuing to use our website. Hide this message More on cookies »